At the weekend, I went down to Dorset to spend the weekend with my sisters at my mum and Peter’s new house in Poole, to celebrate Mother’s Day.

It was a sunny day weekend, and we had fun exploring the town, including the seaside and Poole Park, visiting the Poole pottery showroom, and eating lovely food together. Looking forwards to more visits in the future, it’s a lovely part of the world! 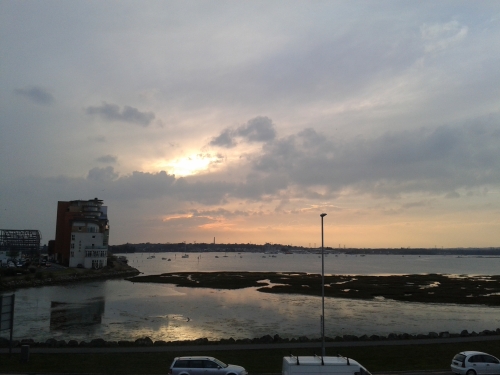 In the Northern Hemisphere, today marks the first day of spring, when day and night are the same length. It certainly feels springlike today, with daffodils in bloom and buds opening on the trees. Last night we made the most of the sunshine and cruised out to the GOBA moorings near Bottisham Lock, where we had a lovely dinner with our friends Simon and Ann on NB Melaleuca (also known as the Moomins).

A couple of pictures from yesterday 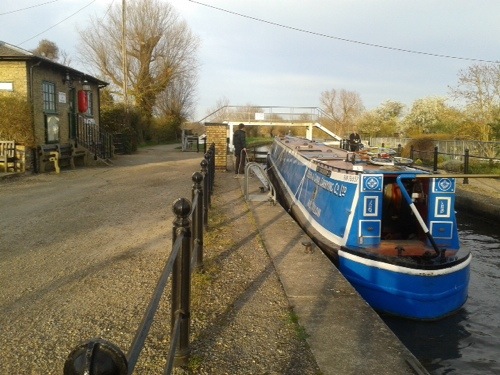 Photos from the Weekend

A few photos from the weekend. On Saturday James was in London, stepping in at the last minute to cox the Chesterton boat in the Women’s Eights Head of the River. I stayed at home, getting on with work and chores as well as snuggling with the littlest cat. She likes standing on her back legs, supporting herself on the window sill and staring out at the river. So far, she’s not convinced by the idea of actually going outside though, running away if I lift her up to get out of the kitchen window.

On Sunday, we went to St Ives for lunch and to collect some gas and diesel. It was such a lovely day, we wished we could be boating!

When we got back it was time to carry on with some DIY projects – the plinths under the kitchen and the living room cupboards are now finished. I got on with some “gardening” – cutting back the grass which encroaches the concrete edge of the mooring 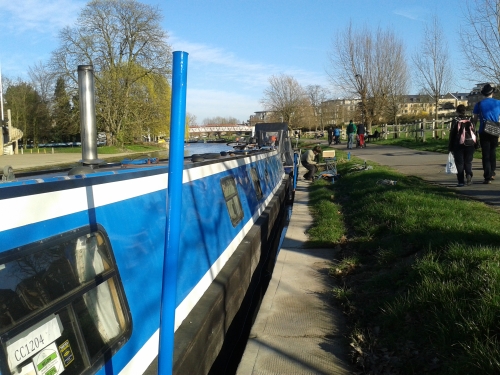 In the evening we sat down with books and I curled up by the fire with Lyra.

Drat, our main route out of the Fens is going to be closed for several weeks (see below), meaning that we wen’t be able to spend as much time out on the canals as we’d hoped, unless we can get the go ahead to take the more difficult Hundred Foot route instead. We’ll still get out and do some boating though, and this may mean that we get around to doing the Wissey and Lark properly instead of rushing out of Denver and up the Nene.

Here’s the full notice in case anyone else needs the info:

Due to essential, emergency maintenance work required to the gate, Denver Lock will be closed for approximately 4 weeks.

The Agency regrets any inconvenience caused.

Sunday dawned very warm and sunny – it was a glorious day to be on the river. It was also the day of the Cambridge Half Marathon, a 13.1 mile running race around the city, beginning and ending on Midsummer Common. Willow is moored just a few hundred metres from the finish line, so we were in a prime position to watch the race and support friends who were running it (we knew about 12  competitors). We set up some chairs on the roof and sat down in the sun to watch and cheer on the athletes. The day grew increasingly warm, definitely the hottest day of the year so far and a shock to those who’d been training through the cold winter! We saw several friends run past, cheering them to the finish, then we saw a chap we didn’t know stumbling along almost drunkenly, and as he got to Willow, he finally fell, collapsing on the verge next to the boat. Immediately an onlooker with some medical training was there, as were we, helping him into the recovery position, and fetching a glass of water. But it was clear that he needed more than just a drink, he was very hot, and so we fetched bowls of cold water from Willow to pour over his body and head, as well as some cushions to support him, and wet towels to keep him cool and bring his temperature down. The official first aiders arrived, and after a while he was able to get up and walk over the finish line. As a result of all this we missed several of our friends passing by, but they all finished and did well. 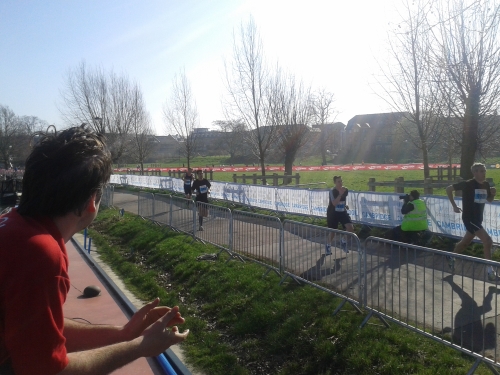 After the race, we drove out to the Emmaus charity shop, where we got a second workmate for the garage, and some books, before coming back via the Parish, where we had tea with Jackie and our neighbours from Light Enough to Travel, who were out there having spent the weekend at Wicken Fen. We arrived back late afternoon, and got on with fixing the plinths under the kitchen cupboards, to avoid losing the littlest cat under there again! She rushed under there when we ran the engine on Saturday, and then Lyra held her hostage, making her too scared to come out! 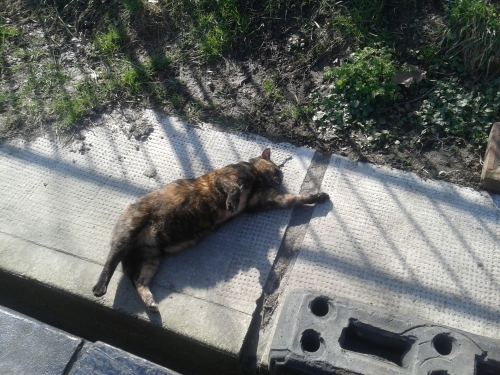 Lyra enjoying the sun. Look at that fat belly!

What a glorious weekend! Now it’s back to the sort of weather you expect in early March but we had such lovely sunshine on Saturday and particularly Sunday.

We had a lovely afternoon’s boating on Saturday, stopping at a mooring we’d never visited before – a rare thing round here! A friend was holding a pirate themed birthday bash at a little community pub in Horningsea, so we decided to try and go there by boat. Problem is, the two visitor moorings in Horningsea are both 40′ long and have signs saying “No Overnight Mooring”. Undeterred, we went up past them, winded at the Bridge in Clayhithe, and moored up with the front 40′ of the boat against the bank, and the  rest overhanging a little cut and the end of the massive garden of the house next door, using a mudweight.  Next door were down to find out exactly when we planned on leaving, as soon as we arrived, and although polite, were clearly annoyed about us being there, explaining that people had stopped there for months at a time in the past, so mooring overnight had been banned. But they grudgingly accepted our explanation of a visit to the pub, and left us alone.  It’s a beautiful spot, and nice to have a change for once, getting that feeling of  mooring somewhere new and walking about exploring the locality. We sat outside enjoying the sun, then after dinner dressed up for the evening. Afraid we weren’t very convincing pirates, just wearing token bandanas over a stripy dress (me) and a shirt/waistcoat/jeans (James). It was a great evening, with lots of boaters in attendance. We were the only ones who came by boat though! 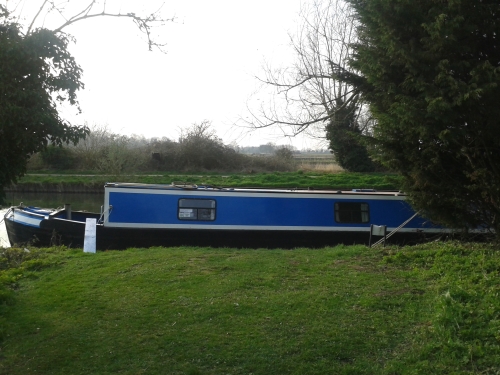 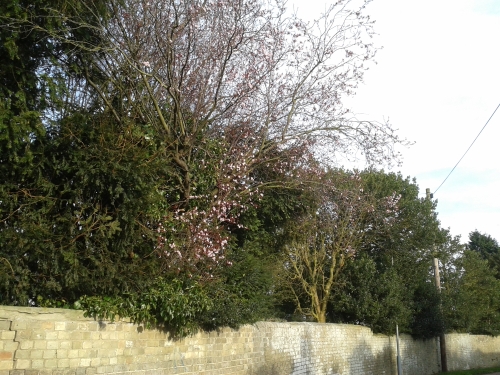 We left the party about 9:45, as we needed to move Willow as promised. We hoped to stay out of town but as we were pointing upstream towards Cambridge, we would have had to turn at Baits Bite Lock to go up to Clayhithe, and in the dark, having never winded there before, we decided to chug back into town, following (and eventually overtaking) party boat Georgina. We moored up in our usual spot at 11:45.

Willow up the Crow

Willow‘s previous owner very kindly send us this lovely photo at the top lock of the Crow, where the Tat Bank branch (on the right) joins the Titford Canal, in 1990. He says that getting back down again was more difficult, but it’s great to know that Willow can get to the top! It’s wonderful to see pictures of Willow‘s past travels, and it inspires us to get out and go places ourselves.

We hope to get in a bit of boating over the Easter holidays, although our plans are not sorted yet, a dash up to the BCN is not without the bounds of possibility. It depends on many factors, including many outside our control – the weather and the resulting levels on the River Nene being the main one! But even if it’s only Bedford and back, we will go boating soon! We’ve been stuck in the same place for too long now and we’re longing to get some new waters under the hull!