A few people have asked about my engagement ring. I didn’t want a diamond – setting aside the issues of sustainable and ethical sourcing, they’re just not very me, but I’ve loved opal ever since I saw the opal ring my grandma wore. And I really wanted to support an independent craftsperson. One jewellery maker kept popping up in my Etsy searches and that was Nan Fan Jewellery. I got in touch and asked if she could make something similar to one of the rings she had in her shop, but in opal. I chose a lab opal which is chemically identical to the natural stone but with none of the environmental impact of mining.

She was happy to and was friendly and helpful throughout our transaction. This is what she made, in close up. I think it’s perfect. 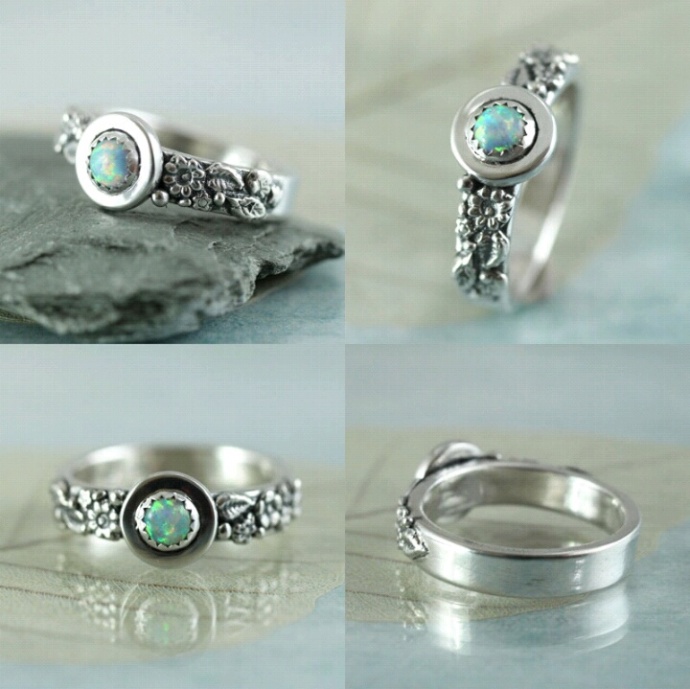 Her pieces are made from silver clay which is made from recycled silver (from photographic film) and a binder. The putty can be moulded into any shape, and them fired. The high temperatures vapourise the binder leaving just the silver. I was fascinated and asked Nana if there was any chance she could take a couple of quick photos of this process. She was more than obliging, and sent me this amazing series, with explanations.

1.      First thing to do is to roll out an even slab in metal clay. The
silver particles are mixed with a binder that make it workable like clay. I
love working with this stuff
2.      Then cut to the right width – thank God for rulers.
3.      Shaped around a mandrel at this stage the ring has to be a lot
bigger than the end target as the ring first shrinks on the mandrel (hence
the gap you see) and then again in the kiln
4.      The shank has been filed and refined and is ready for decorations
5.      The little element in progress here. They fun to make. Some are
shaped by hand, some I have made tiny moulds for. I like having plenty to
hand once the assembly starts
6.      The setting for surrounding the bezel is cut out in roughly the
right size
7.      Then sanded and made to fit perfectly. Again it has to be slightly
larger because it will shrink around the little fine silver bezel
8.      The setting is fitted to the shank using slip clay and a lot of
water. A little hole in the bezel gives the clay a good mechanical bond so
it won’t fall out.
9.      Flowers and leaves go on one tiny bit at a time.
10.     I wear magnifying glasses to see what I’m doing at this stage :o)
11.     The ring has dried and is ready to go in the kiln.
12.     Several hours later it comes out again and is looking good. It has
that white look as the silver particles ‘stand up’ straight out of the kiln.
When burnished it gets the proper silver look.
13.     Checking the size. Luckily it came out a perfect K
14.     And the stone still fits. Yay
15.     After a few hours in the tumbler the ring comes out all shiny
16.     Just been dipped in liver of sulphur. Completely black
17.     Polished back to shiny again
18.     Ready for setting the stone. It’s always best to do that last so it
doesn’t get damaged during polishing.

The end. Then the ring went to my proper photography station for the last
shots before I had to say goodbye.

Bantam IV goes to the Cavalcade (and some news!)

First bit of Bantam boating of the year yesterday – we went down to London to take the tug to the festival at Little Venice.

But first, we had time for a little walk along the Regent’s Canal. At City Road Lock James had a question to ask me!

We had decided together a few months ago that we wanted to get married, and I’d picked a ring so I knew it was going to happen sometime soon. James waited til I’d handed in my first draft of my thesis before making it official where we used to walk when we first got together, dreaming of living afloat.

There was a tradition amongst the boat families that a boy courting a girl would write his initials on a lock beam in paddle grease above those of the girl he liked and then if she liked him back she’d do the same the other way around. So we followed the old tradition (and cleaned it afterwards, there were some volunteers out cleaning the towpath and we didn’t want to make more work for them!) 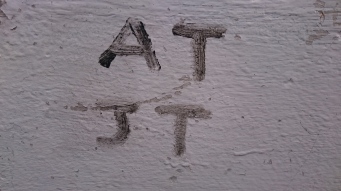 Then James got down on one knee and asked if I wanted to get married, to which I of course said yes! He gave me the lovely silver and opal ring I’d had made by a talented Sheffield jewellery maker, Nana Louise of NanFan Jewellery.

Then it was time for boating! It was a beautiful evening for boating through London and we arrived at Paddington without incident. Some inquisitive hyenas followed the boat along the fence for a way through the Regent’s Park zoo. 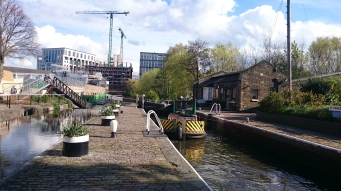 The Bantam is tied up on the Paddington arm opposite the Canal Museum stand and we’ll be around most of the weekend if anyone is passing by!