Another evening cruise, through a few locks and the beautiful Tixall Wide. 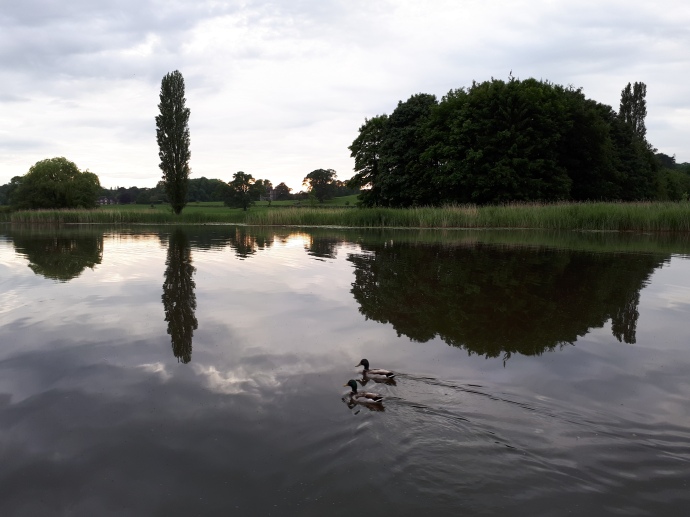 We tied up on the Trent and Mersey just north of Great Haywood junction.
Categories: Uncategorized | Leave a comment

A short hop after work to Penkridge to get a bit further as we are now heading to Etruria for the festival next weekend.

We had dinner at Flames in Penkridge, a really good curry place. 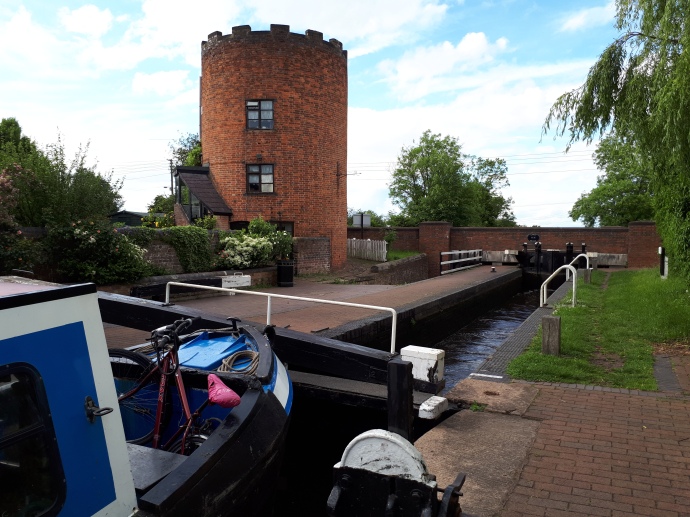 Catching up on the blogs after the BCN Challenge!

On Bank holiday Monday we set off down the Crow backwards as with the locks being such a tight fit we didn’t think we’d fit the other way around. We had help from the crew of Team Tawny Owl, with whom we’d also had a lovely breakfast and dinner the night before (thanks Sue!) Annoyingly we managed to unship the rudder going down but James and Andrew managed to get it back in pretty quickly. 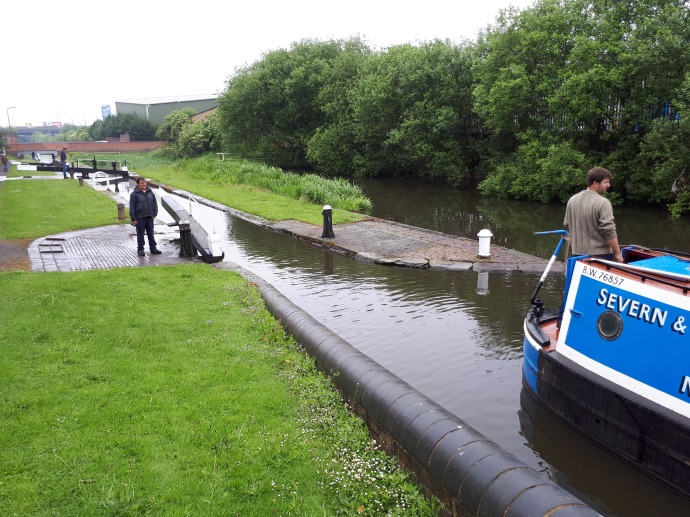 Backwards down the Crow

Andrew had kindly offered to stay and help us down the Wolverhampton 21 as well which was appreciated especially as it was quite damp.

Down the 21. Photo Andrew Haysom

At the bottom we said goodbye to Andrew who was off to catch a train from Wolverhampton and set off North up the Staffs and Worcester. We tied up at Gailey.

This past weekend saw us competing in the BCN 24 marathon challenge. This brilliant event is organised by the Birmingham Canal Navigations Society and the idea is to explore as much of the BCN as possible in 24 hours of boating. We competed with friends in hired boats Yeoford and Collingwood in 2011 and 2012 but have never done it on our own boat so this was very exciting!

We had two crew members:

Andrew, who doesn’t have his own boat but loves historic narrow boats and has lots of experience with the Narrow Boat Trust and others (James met him when they were both helping Jason with Bargus’s docking).

Lee, who owns ex GUCCCo Barnet as well as his modern boat Kennington and lives in London (we met when he very kindly let us moor Willow on the Broadway Market moorings he runs the night before our wedding)

On Thursday night we made it to Cambrian Wharf and I was working on Friday. James cycled back to Lyon boatyard to make sure we had two cabin shafts ready for the BCN (one of them snapped trying to remove the bladeful we got at Kings Norton Junction.) Andrew and Lee arrived at 5-6pm and we went for a planning dinner at Ed’s Diner.

As in previous Challenges we picked Gas Street as our starting point mainly for convenience, and so as the Campanile bells rang 8am we set off down the Farmers Bridge flight. With 4 experienced  crew we were quick and got on with the 46 locks that make up Farmers Bridge, Aston, Perry Bar and Rushall before lunch! 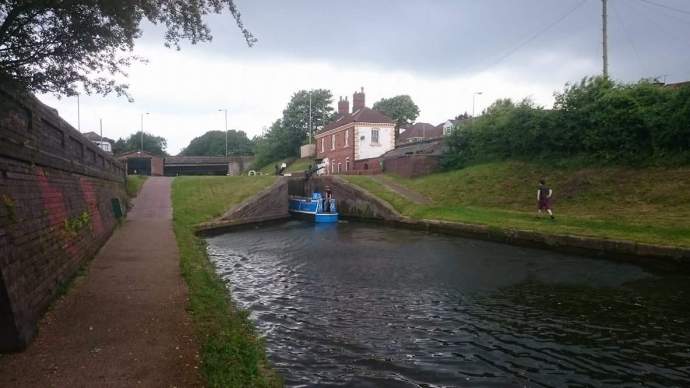 However at the top of Rushall the engine just stopped… as we we’re heading straight for the only moored boat we’d seen for ages. Amazingly it managed to splutter back into life for long enough to reverse and so avoid hitting it before dying again. James quickly diagnosed fuel supply issues and a clogged filter and thankfully we carry a spare fuel filter so he switched it and we were good to go again. This used up 45 mins of the obligatory 6hrs “rest”. However this meant we no longer had a spare so Andrew cycled off to motor factor in Walsall which James had rung and bought two new ones!

Our next stop was up the Cannock extension to gain the extra points. Then we had planned to turn down the Walsall canal at Birchills but emailed reports of no water in the flight and kids throwing stones made us change our minds and do the whole of the “Curly” Wyrley and Essington. We stopped in to Holly Bank Basin at midnight to get more bonus points which involved shafting Willow backwards as it was quite shallow.

Then on round to the junction with the Main Line at Wolverhampton and the deeper water and fewer awkward bends. But just before we got to Factory Locks (and at about 2am) the cooling system gave up (a hose came off) and dumped a lot of water into the bilges! We lost another 45 mins of “rest time” here as we has to relay bottles of water and fill the system back up again! 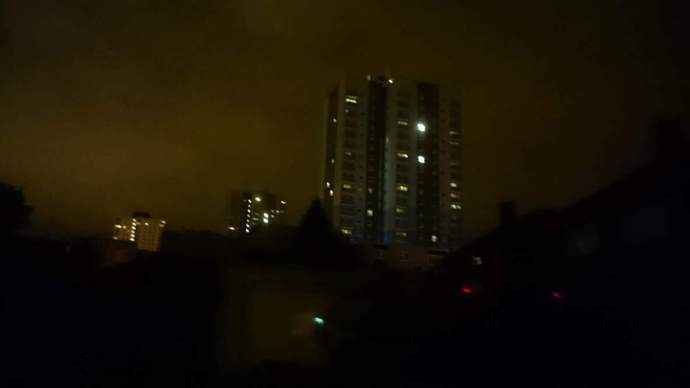 This done we carried on to Factory Locks where we met the first boat we’d seen in a while – nb Enceladus. Seeing another boat going on through the night inspired us to keep at it (later on they said they’d felt the same!) So instead of heading directly for the finish line we “nipped” down Ryders Green locks and back up. This took a fair while as we found lock 5 was a bit iffy and wouldn’t open properly and bottom pound was very low. But we made it to Ocker Hill for the points and back up the flight behind Atlas and Malus the CRT heritage pair. 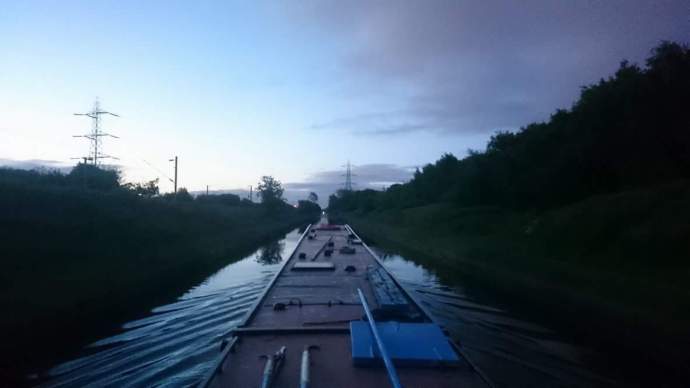 Dawn on the New Main Line

By this time it was a lovely morning and the sun shone as we ascended Spon Lane and under the M5 motorway’s huge pillars.

Then it was up the Crow to Titford  where the Challenge finished this year. These are known to be tight but we knew it was possible for Willow’s 72ft hull to get there as we have a picture that her previous owner sent us of our boat in the top lock by the pump house which gave us hope!

Lock 4 was extremely tight (length wise that is) but we got the gate closed with a bit of wiggling past the stern. And then we were up the flight and finished! We used the remainder of our “rest time” to actually rest!

Tight fit up the Crow

It was definitely a Challenge especially with the engine trouble but great fun. We definitely wouldn’t have managed it without Andrew and Lee who were both fantastic crew, with seemingly unlimited energy and good spirit.

The after party was great fun, swapping tales of the delights of the BCN and catching up with friends from the other crews. A big thanks goes to the BCNS for organising another great challenge. 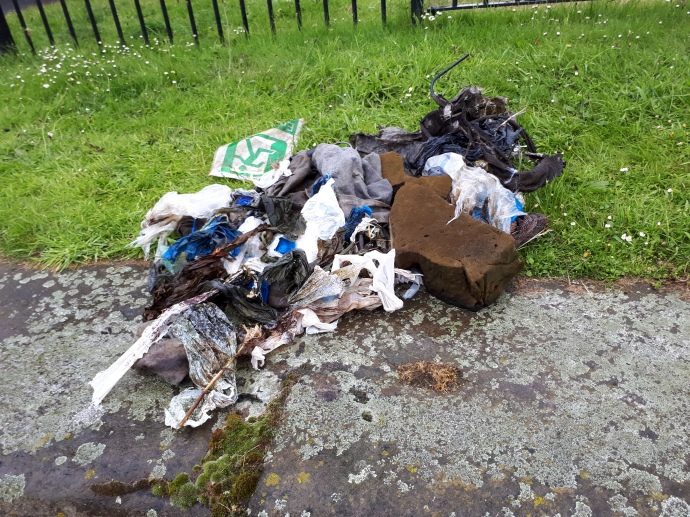 The hottest day of the year so far and it definitely felt like it!

The North Stratford Canal was beautiful but extremely slow going.

At the Worcester and Birmingham stop lock we caught a bladeful of canvas sacking that took some getting off – our first Birmingham bladeful of many I expect! 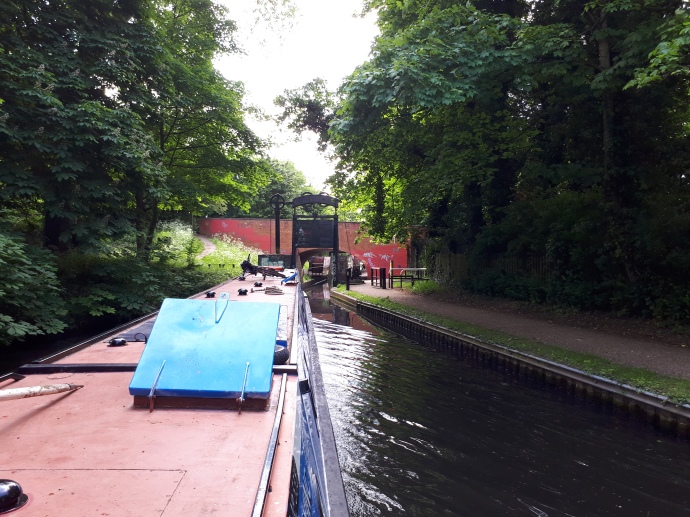 We tied up at Cambrian Wharf at about 4pm and then went into Birmingham for burritos and ice cream. 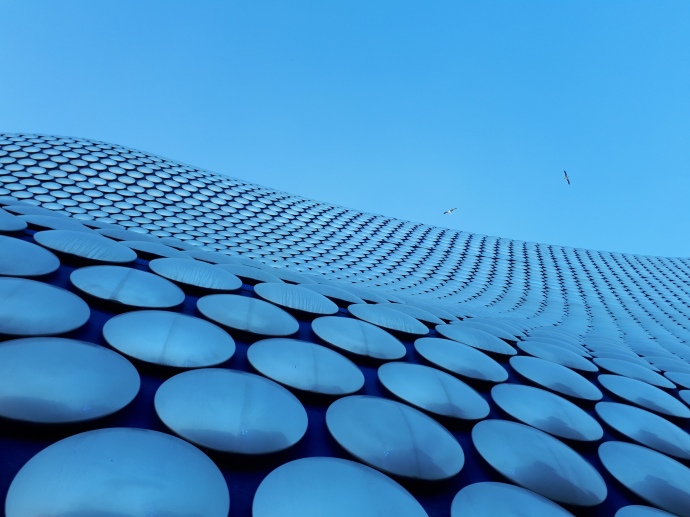 It was such a lovely evening that we decided to set off and do the Hatton flight.

We shared with nb Endeavour and made it in 3 hours.

Now tied at Kingswood Junction ready to go through to Birmingham tomorrow!

We started up the Lapworth flight and all was going well until we saw this: 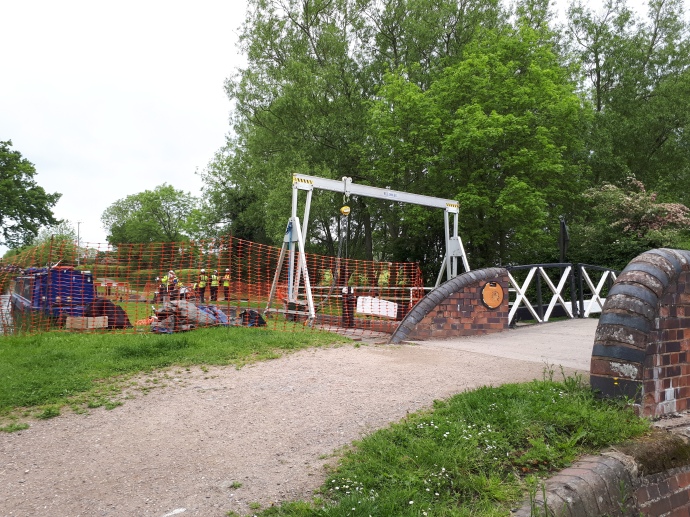 Canal and River Trust were carrying out maintenance on Lock 14, but it wasn’t planned so there had been no warning. That meant we were delayed by over three hours.

This meant that by the time we got to the top there wasn’t time to get through to Birmingham so we decided to stop and make our way in on Thursday. 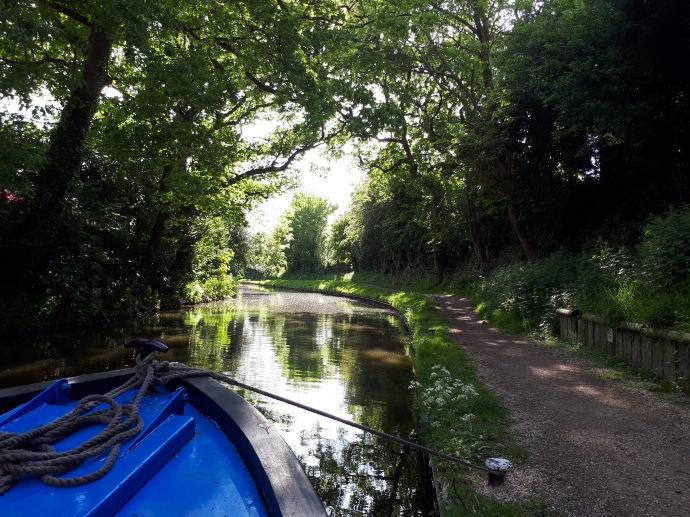 We’re tied up in Hockley Heath, in a nice spot just by the Wharf pub.

Today was a bit more challenging than usual. We’d been warned that some old (wider) boats stuck in Napton Lock 9 as it has sagged but we’d decided to go this way anyway and chance it.

So when we got firmly jammed it was not a surprise. It took nearly an hour to get out of the lock and it would have taken longer were it not for the very welcome assistance of CRT lock keeper Steve Powell. Other historic boaters had said that he would be able to get us through and with a combination of skilled flushing, a snatch from another boat and some judiciously applied washing up liquid we were out.

It was quite exhilarating when finally Willow shot forwards on a surge of water.

Here’s where we stuck:

After this excitement a cup of tea on board Helen and Andy’s boat Wand’ring Bark at the bottom of Calcutt locks was very welcome and it was great to see them as they set off on their southern adventures.

We stopped at Long Itchington and decided that a meal out and a drink was in order so went to the Blue Lias for dinner.

I was working today and it rained all day but in the evening the skies cleared for a while so we made our way across the summit pound.

However the rain clouds started to gather and we couldn’t outrun them, so James tried out his new waterproofs! 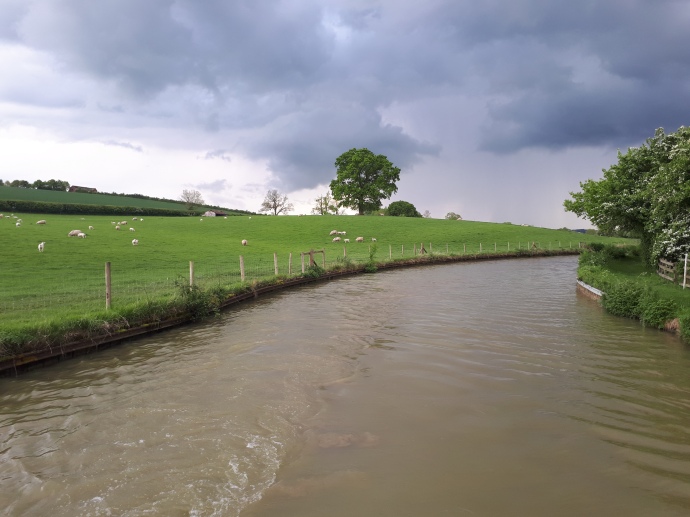 We tied up and ate dinner at about 8pm (eventually finding a bit of bank we could get close to) but we’re now ready to make an early start down Napton.

This evening we also had a lovely surprise – our friend Pete Tuffrey is a fantastic artist and boater who specialises in painting wonderful evocative canal scenes. He’d seen a photo James took on Facebook yesterday and created a beautiful painting based on it. He entitled it “The Honeymooners” and is giving it to us as a wedding present. We are delighted! 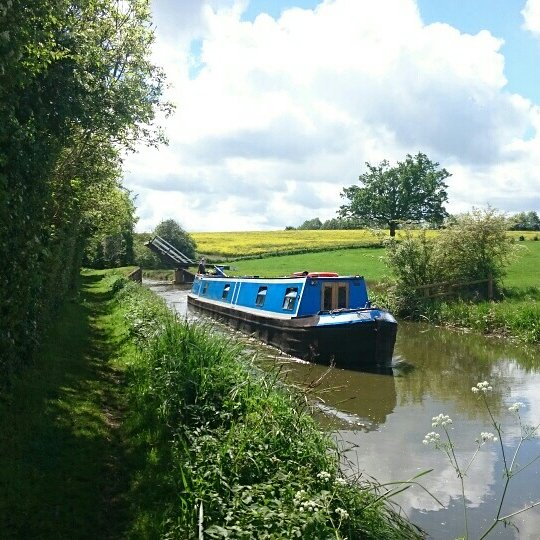 Wednesday was spent working during the day and then socialising in the evening. We saw our friends Jim and Emma for a drink at the Bell in Heyford then visited Bones back at her boat in the evening – she had just finished her masters exams so we shared one of our bottles of wedding fizz with her.

Then today we spent all day boating through picture postcard beautiful Oxfordshire. It was quite stunning especially after the rain of yesterday. Everything was particularly lush and green. 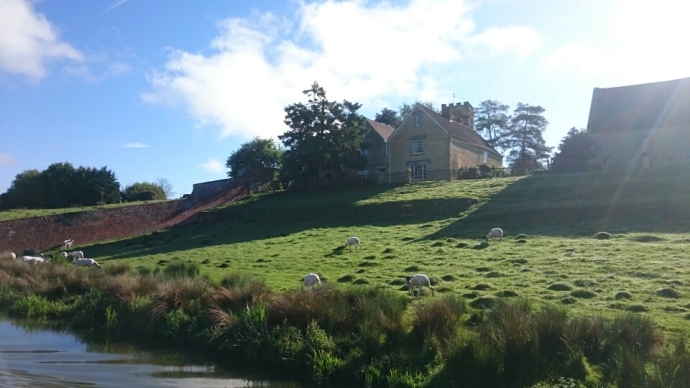 We had a bit of trouble at Somerton Deep Lock because of an obstruction behind the bottom gate but eventually managed to get past it with lots of flushing and wriggling. It’s not a new problem but we made sure to inform CRT anyway.

In Banbury we passed nb Muleless (other bloggers) but no pics sadly as I was single handing Willow round a bend and was concentrating on steering when we encountered them! 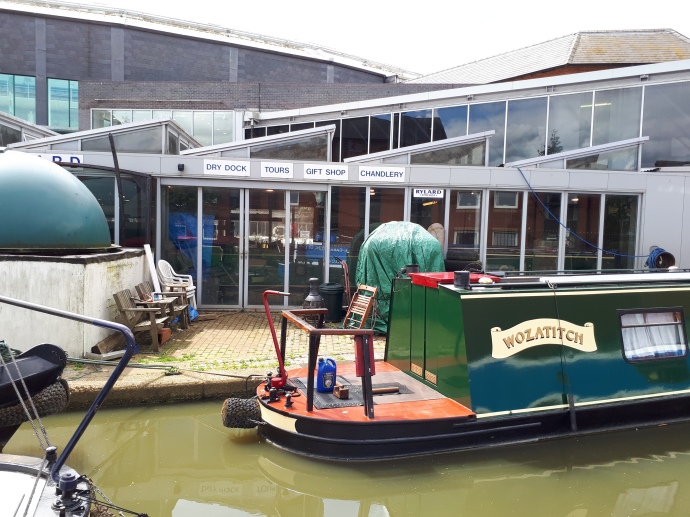 We stopped for water and to empty the cassettes at Cropredy then carried on into the evening to get to the summit pound. There’s also decent signal here for work tomorrow.